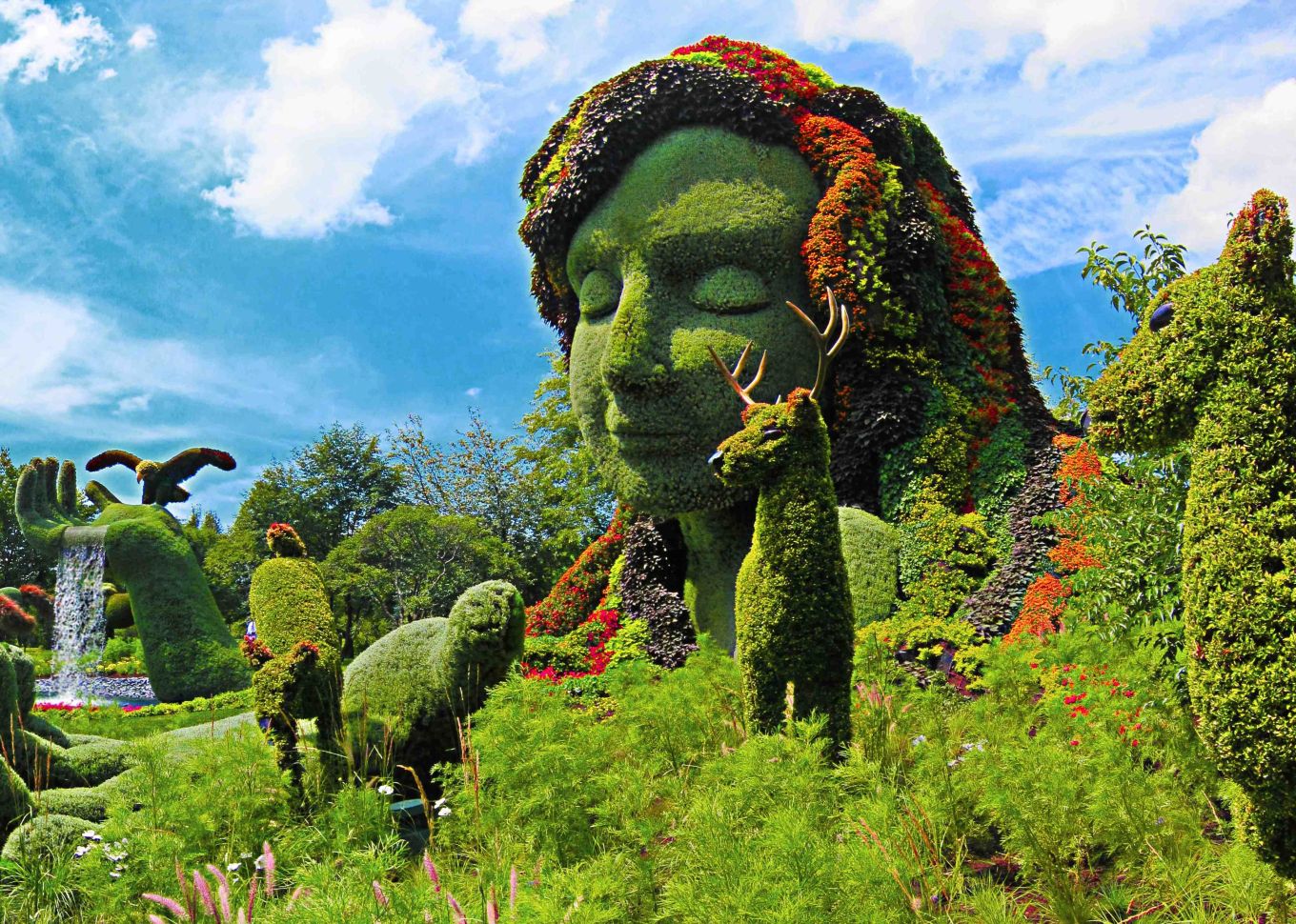 It’s been one of the largest eco-responsible event, featuring over 40 living plant sculptures. Called Land of Hope and held at the Montréal Botanical Garden, in 2013, it was curated by Mosaïcultures Internationales de Montréal, an international competition of mosaiculture — refined horticultural art that involves creating and mounting living artworks made primarily from plants with colourful foliage.

Over three million colorful flowers and plants, cultivated by 200 international horticultural artists originating from more than 20 countries, not only to display astonishing two and three dimensional constructions, but to tell real stories.

Stories like the Chinese one of Xu Xiujuan, who drowned out of exhaustion in a swamp, on September 16, 1987, to find a lost rare bird. In 1986, the 23-year-old girl from northeast China’s Heilongjiang Province traveled to Yancheng with three red-crowned crane eggs. She helped establish a natural reserve and participated in the artificial hatching experiment of the cranes. Xu was recognized as China’s first martyr in the field of environmental protection.

The Man who Planted Trees sculpture was rather inspired by a 1953 homonymous short story published by French author Jean Giono, telling about one shepherd’s long and successful single-handed effort to re-forest a desolate valley in the foothills of the Alps in Provence throughout the first half of the 20th century.

There is little to say about Earth Goddess — or Mother Earth — expect that it is a deification of the Earth. Earth goddesses are often associated with the “chthonic” deities of the underworld.

Ki and Ninhursag are Mesopotamian earth goddesses. In Greek mythology, the Earth is personified as Gaia, corresponding to Roman Terra, Indic Prithvi/Bhūmi, etc. traced to an “Earth Mother” complementary to the “Sky Father” in Proto-Indo-European religion. Egyptian mythology exceptionally has a sky goddess and an Earth god.

The torso by Lise Cormier rised 15 meters in a prairie where horses and bison roamed. Deer ambled down her outstretched arms. Her hair was planted with geraniums and petunias, her skin was santolina. It looks very similar to the Earth Goddess at the Atlanta Botanical Garden, except for the hand placement and faces.

Created by Mosaïcultures Internationales de Montréal, Earth Goddess, with her flowing locks and out-held hand spilling with water, became part of the Garden’s permanent collection. During the holidays, her hair shines bright as she becomes Ice Goddess.

The Montréal Botanical Garden is located in the province of Quebec, Canada. Opened in 1931, this magnificent garden began with an administrative building and various orchards and many development ideas.

It is much more of a place where visitors can sit under a tree for a few relaxing moments. Its fundamental role, according to its founders — botanist Marie Victrorin and horticulturalist architect Henry Teuscher — is the education and conservation of endangered flora species.